Concept of Dispersal and Distribution 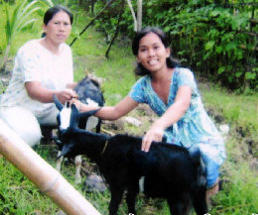 In May 2008, Dayspring Commission Inc. supported Pastor Sherna Heramis of Full Gospel Church in Barongis, Libungan in a goat raising project to benefit the Manoba tribe in the mountain regions of the area. The project initially cost P2,000 ($50).

In the first round of the project, the money was used to purchase two goats. One of the goats would not give birth and was sold. The other gave birth to two kids. Unfortunately, one of the young goats died from exposure to pesticides. In the second round of the project, another goat was purchased to replace the one that was sold.

Although the project did take off, DCI will glean from this experience and hopefully apply what was learned to future projects.